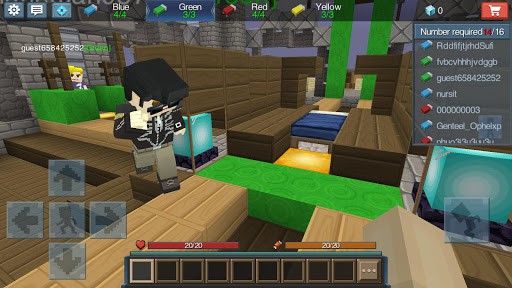 Bed Wars is a Adventure App for Android developed by Blockman Go Studio. Download the latest version (1.9.7) of the apk here, in Apks Mods released February 27, 2021

Bed War is a team-up PVP game that has gathered a large number of players in Blockman GO. Players protect their base —— the Bed, and use all the resources they have to destroy others' beds to win the final victory.
Here are the rules for this game:
- It will divide 16 players into 4 teams. They will be born on 4 different islands. The island has its own base with a bed. Players in the team can be revived as long as the the bed exists.
- The island will produce irons, golds, and diamonds, which used to exchange for equipment from merchants in the island.
- Use the equipment and blocks in hands to collect more resources on the center island.
- Build bridge to enemy's island, destroy their bed, and kill them.
- The last surviving team wins the final victory.

If you have any reports or suggestions, please feel free to contact us via [email protected]